Birds are Migrating – Lights Out, Please 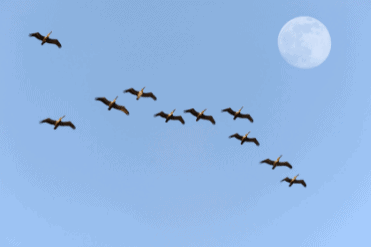 During September and October, billions of birds are migrating to their wintering grounds (find information for specific regions here). Covering thousands of miles across states, countries and continents, birds such as warblers, orioles, wrens, herons and tanagers make these age-old journeys in the dark of night. They face many perils along the way – including one we can all mitigate: light pollution.

Unlike humans who rely on light at night for safety and navigation, migrating birds are confused and distracted by artificial light, making it hazard. Excessive, poorly controlled light can attract and disorient birds –causing them to collide with illuminated buildings or circle lit-up structures to the point of exhaustion or simply draw them into areas where they face further risks during daylight hours. Cornell University Lab of Ornithology, Colorado State University and UMass Amherst’s BirdCast website reports that an estimated 365 million to 988 million birds die in collisions with buildings annually.

While this is a sad reality, it is a situation that can be mitigated by commercial facility operators, city building managers, colleges and universities – and each of us. And right now.

Consistent with our recently announced LUNA Technical Requirements designed to save energy and mitigate adverse environmental impacts of lighting at night, the DLC is taking an opportunity this fall to spread the word about the BirdCast Lights Out campaign: https://birdcast.info/science-to-action/lights-out/ The program offers simple steps for building owners and managers to lessen the impact of light pollution during fall (and spring) migration. These include:

For essential lighting (such as security lights), best practices published by the Illuminating Engineering Society (IES) and  International Dark Sky Association (IDA) include:

This can be made even more practical for municipalities and building owners and managers by replacing old, traditional light sources in interior and exterior spaces with LED, because LED is inherently dimmable. The DLC Solid State Lighting V5.1 Technical Requirements ensure that listed products are dimmable to enable connection to Networked Lighting Controls. These controls can automate the building lights to be dimmed or turned off when spaces are unoccupied and during migration peaks to save birds and manage energy use.

There is a growing movement to reduce light pollution during bird migration, with Lights Out programs springing up in dozens of cities across the country – Boston, Atlanta, Chicago, New York, Philadelphia, , Denver, St. Louis, San Francisco, Seattle and Minneapolis-St. Paul, to name a few. And there is a major effort occurring in Texas, in cities like Houston, Fort Worth, Dallas, Austin, and Galveston, where the Cornell Lab of Ornithology, BirdCast, Texan by Nature and a host of local and state partners and stakeholders, including Mayoral offices, are collaboratively coordinating Lights Out Texas. Maybe that’s because, at a time when some environmental solutions seem intractable, this one is straightforward.

Of course, whenever lights are turned off or dimmed, electricity is also saved, along with the fuel used to generate it. According to the IDA, a third of all outdoor lighting in the US is wasted, costing facility owners some $3.3 billion annually and responsible for 21 million tons of carbon emissions annually – making this a factor in the national climate conversation, as well.

In her seminal book, Silent Spring, often credited with launching the modern environmental movement, Rachel Carson asked: “Have we fallen into a mesmerized state that makes us accept as inevitable that which is inferior or detrimental, as though having lost the will or the vision to demand that which is good?”

Almost 60 years later, the will and the vision remain, and taking the Cornell Lab’s Lights Out pledge is a small step for that which is good. The birds thank you.