Examining the Impacts of Nighttime Lighting on Ecosystems and Wildlife 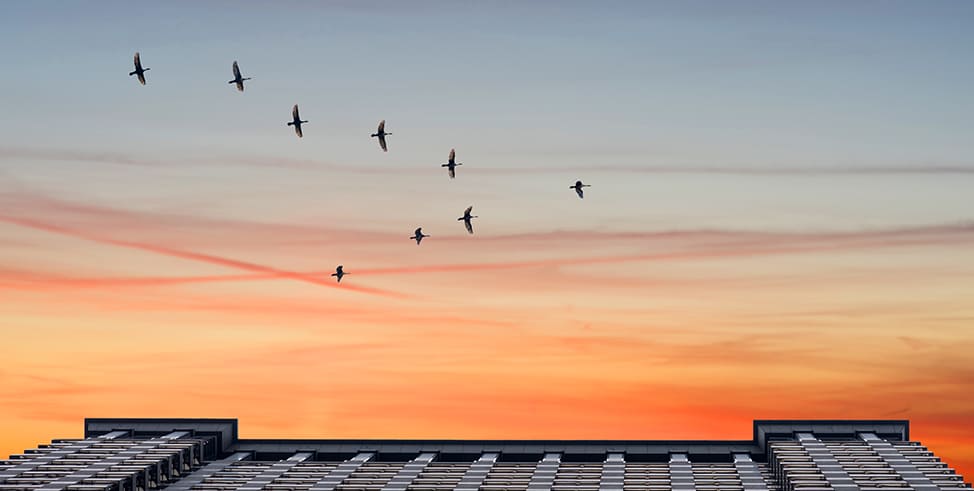 The second in a series of DLC webinars on “Responsible Lighting at Night” cast a broad perspective on how artificial light at night (ALAN) can harm natural ecosystems – from heightening risks for migrating birds to confusing mating fireflies and disrupting nesting sea turtles. Presented by panelists expert in lighting science, natural ecosystem management, and wildlife conservation, the March 2022 webinar also covered promising efforts to reduce light pollution in ways that benefit both wildlife and human communities.

Leora Radetsky, the DLC’s Senior Lighting Scientist and a principal contributor to the LUNA Technical Requirements, set the stage for the webinar by noting that ALAN is increasing by about 2 percent each year, with outdoor nighttime lighting getting brighter and more widespread and impacting freshwater, marine, and land-based ecosystems.

“If we keep doing what we’re doing, if we don’t change how we select products and install products and control products, not only are we wasting energy,” Radetsky said, “we’re also wasting money, we’re losing our ability to see the night sky, we’re affecting the light-dark patterns of hundreds of thousands of organisms around the world, and we’re affecting predatory-prey relationships as well.”

The impact to birds is of particular concern, since the migratory bird population in the U.S. has shrunk 28 percent – by approximately 2.5 billion birds – since 1970, said Julia Wang, Project Leader for BirdCast, a Cornell University-based research consortium aiming to better understand bird migration patterns and apply those data to real-world problems.

About 70 percent of North America’s birds are migratory, Wang said, and about 80 percent of those migrate at night, using the moon and stars for navigation. Citing several high-profile instances, she said collisions with illuminated buildings account for the deaths of up to one billion birds annually in the U.S. Recent examples include the deaths of hundreds of birds in a single night in New York City, 1,000 to 1,500 birds dead in one night in Philadelphia, and about 400 migrating birds killed colliding with a single building in Galveston, Texas.

The annual Tribute in Light at the 9-11 Memorial in New York, an art installation that sends twin beams of light up to four miles into the sky, is visible from a 60-mile radius around lower Manhattan. Illuminated from dusk to dawn every September 11 – during fall migration for many species – it was annually confounding hundreds of birds, keeping them circling in the light beams and leaving them exhausted and more vulnerable to predation, building collisions, and other urban threats, Wang said. To address this problem, volunteers now continually photograph the sky and count the number of birds they see. When monitors count more than 1,000 birds trapped in a beam of light, the lights are extinguished for 10 to 20 minutes, allowing birds to find their way out and continue on their journeys.

Light pollution is an issue in non-urban environments too. Jeremy White, a physical scientist with the National Park Service’s (NPS) Natural Sounds and Night Skies Division, noted that “there are still some incredibly dark places left in the US” – particularly in national parks – and increased sky glow from poorly designed and/or installed outdoor lighting harms these protected places.

White said sky glow from as far as 200 kilometers away is measurable in remote national parks and can mimic moonlight. When nighttime light at night is chronic, not cyclical like the moon, it can impair wildlife behaviors that have evolved over millions of years, affecting wildlife across a wide range of taxa, from insects to large predators, and disrupting behaviors such as migration, foraging, and mating.

Regarding current trends for addressing the impact of nighttime lighting on wildlife, Radetsky said the lighting industry is increasingly interested in developing and installing LED light sources that limit the short wavelength (violet-blue, or 400-500 nm) light often linked to light pollution. A major challenge, she said, is that standards for what constitutes blue light vary considerably from organization to organization. In addition, the optimal spectrum, duration, amount, and timing of light vary depending on wildlife taxa, and there are no standards for non-white (i.e., amber) light (the topic of a 2022 DLC whitepaper). Additional research and consistent standards are essential to the development and optimization of products that will best shield wildlife species from the impacts of light pollution, she said.

The DLC webinar covered other solutions in the making and, in some cases, already implemented. White noted, for example, the scientific tools his program provides to NPS staff around the country, enabling them to calibrate the nighttime brightness of the sky and design park-specific solutions. A Night Sky Academy provides training in light pollution issues for park rangers, as well as the loan of equipment for dark sky interpretive programs in the parks, he added.

BirdCast’s Lights Out campaigns are raising awareness and prompting action by governments, citizens, and businesses in various communities, Wang said. An example of “dynamic conservation” that uses radar to determine when and where birds are migrating throughout the U.S., the campaigns generally urge turning off or dimming lights between 11 p.m. and 6 a.m. during bird migration seasons. Wang said a Lights Out campaign aimed at the McCormack Place convention center in Chicago – the site of over 40,000 bird mortalities since 1978 – reduced annual bird collisions by 60 percent.

Amid growing research and concern about the impact of ALAN on the nocturnal environment, the DLC also finalized a set of technical requirements in 2021 for energy saving solid-state lighting products designed to mitigate these impacts while still providing useful illumination for human activities. The DLC recently approved the first group of products for its new LUNA Qualified Products List (QPL) on July 28, 2022.

All the webinar panelists stressed the importance of a multi-disciplinary approach to mitigating the impact of ALAN on natural ecosystems. Webinar moderator and DLC Director of Market Strategy & Development Dorene Maniccia noted the challenge of connecting the many disparate groups involved – from lighting, physical, and environmental science to the social sciences and architecture and urban planning.

White pointed out the value of advances in spectral tuning, dimming, and integrated controls, and predicted “some of this new technology is going to get us where we need to go.” Wrapping up, Maniccia agreed: “It will take time, but I’m confident we can all band together and get there.”

The full webinar recording and slides are available on the DLC website.

You can find out more about which cookies we are using or switch them off in settings.

This website uses cookies so that we can provide you with the best user experience possible. Cookie information is stored in your browser and performs functions such as recognising you when you return to our website and helping our team to understand which sections of the website you find most interesting and useful.

Strictly Necessary Cookie should be enabled at all times so that we can save your preferences for cookie settings.

If you disable this cookie, we will not be able to save your preferences. This means that every time you visit this website you will need to enable or disable cookies again.